Not so much talking, we let the music speak. We are purists.

Hey! This is DUMBO BEAT writing for 320KB Magazine.
We are out now with VNCBRG006 vinyl release by DJ P!STA & I as NUDGE in collaboration with the master ENRICO MANTINI: four weapons made for the dancefloor.  We will showcase with GRAPEVIBE at VENICEBERG in Verona on Friday 25th January. What’s the best way to celebrate it?
We bring one of the villains from the BOLO City, the “Smile&StayHigh” label boss which just released his own EP on Robsoul Records: DJ CREAM! “And if you don’t know, now you know!”
If you need to lose your body this is the place to be. See you all in this craziness. Peace! 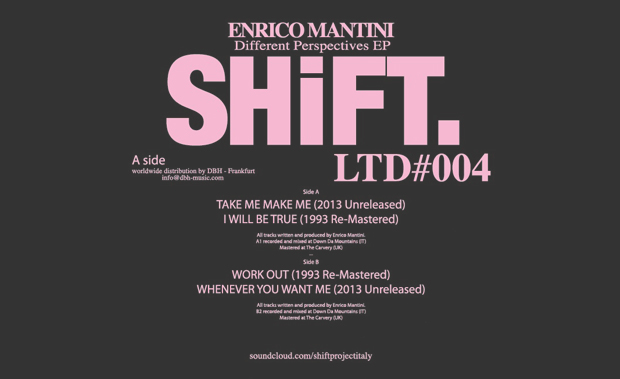 I WILL BE TRUE (1993 Re-Mastered)
(Mantini) SIAE Copyright Control

All tracks written and produced by Enrico Mantini.
A1 recorded and mixed at Down Da Mountains (IT)
Mastered at The Carvery (UK)

WHENEVER YOU WANT ME (2013 Unreleased)
(Mantini) SIAE Copyright Control

All tracks written and produced by Enrico Mantini.
B2 recorded and mixed at Down Da Mountains (IT)
Mastered at The Carvery (UK)

Tracklist:
A1. Dont Think About It
A2. Lost In A Beat
B1. Ecstasy
B2. Get Into Da Muzik

Written and produced by Enrico Mantini and Marco Fioritoni for UMM.

Written and produced by Enrico Mantini for Smoothsound Productions.

Shouts and Respect go to Fabio Monesi, Thomas Franzmann aka Zip, Gerd, Patrick Luca, Fabio Passeri, Eugenio Laurenzi and Mattia Monaco @ Zu:bar, Angelo Tardio (the real Man behind the UMM project), Marco Fioritoni (so much memories togheter!), YouTube users Thumbzo and innerSpace1991 for their contribution and all the deejays that still love and support the real house sound.
Stay true to the Vibe.

Credits:
4lux is proud to serve you the sounds of Italian deep house pioneer Enrico Mantini. This twelve cleverly combines two of Mantini’s most sought-after classics together with two brand new offerings.

All trax come in the old school deep house vibe.
I’ll Be There was originally released on the Ultimate Result EP on Italian cult label UMM back in 1993 and has been a fave deep house tune of 4lux head honcho Gerd ever since.
The same goes for What You Like actually. This is a truly uncompliacted deep house tune released on Mantini’s very own Smooth Sounds in 1992. Now 20 years later these trax still are as actual as they were back then.
The two new track that Enrico recorded for this EP complement the release in a nice way indeed. Don’t Make is a loose track with warm chords, organ stabs and nicely shuffled beats. Last but not least comes U Deep Me, a fantastic hypnotic bomb that sounds fantastic on any club system.

WHAT YOU LIKE (1992 Original Mix) *
(Mantini – Fioritoni) Universal Music Publishing

Dedicated to all the guys who still love the true house sound in particular the man himself Gerd, dj Zip @ Perlon, William Rosario, Fabio Monesi, Patrick Luca, Davidson Ospina, Hector Romero, Dsastro aka Marco Fioritoni, Angelo Tardio (the real Man behind the UMM project), Sam aka Brawther and Jeremy @ MLIU, YouTube users Thumbzo and innerSpace1991 for their contribution. Stay true to the Vibe.