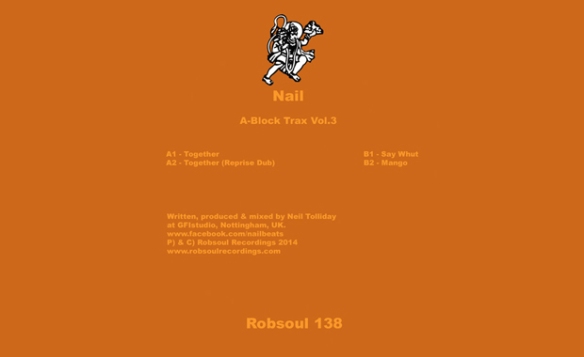 Credits:
Nail is back on Robsoul Recordings with the third instalment of his A-Block Trax series, featuring another four tracks that confirm the Nottingham producer is right back at the forefront of deep and disco-infused House music. The previous two volumes of A-Block Trax picked up praise from Deep House veterans Charles Webster, Fred Everything, Danny Krivit, Fish Go Deep and Jay Tripwire amongst countless others, and Volume 3 looks set to continue in the same vein, equally delighting those who know Nail’s music from back in the day alongside new fans.
What goes around comes around, so the saying goes, and for Neil “Nail” Tolliday— 2013 was the year for a come-around which is continuing strong into 2014. Whilst this side of the millennium was spent chiefly on Bent, his eight-year partnership with Simon Mills that headlined festivals and was a huge commercial success, prior that he was simply Nail, underground house producer and admired cult DJ—origins that some twenty years later are being exposed anew.
With four EPs now penned for Phil Weeks’ Robsoul Recordings – three volumes of A-Block Trax and a collaboration with Cass Roc as The NG9 Project – and others released for AirDrop and Shabby Doll, Nail is unquestionably, in the succinct words of Mark Farina, “back on the block!”
Links
Nail SoundCloud – https://soundcloud.com/neiltolliday
Robsoul Website – http://www.robsoulrecordings.com